Directed by Hari and released in 2008. Starring Bharath, Poonam Bajwa, Simran, Vadivelu, Sampath Raj, and more. Story about a free-spirited young man who falls in love with a heroine. Things get bad when an influential man have sexual desires on the heroine.

This is a hyperlinked movie with 6 anthologies, just like the 6 letters of the movie title. Starring Sundeep Kishan, Harish Kalyan, Shantanu, Premgi, Venkat Prabhu, Regina Cassandra, Priya Bhavani Shankar, Sampath, Vijayalakshmi and more. Directed and written by Chimbu Deven and the movie was released in OTT in 2021.

Story about three young men (Jai, Vaibhav Reddy, Premgi Amaren) who dream to have an effortless life. So, they run away to Goa by stealing Temple jewels. Later, they will meet the love of their life. Along with this trio, this movie stars Aravind Akash, Sampath Raj, Piaa Bajpai, Sneha, Melanie Marie and more. Aravind Akash and Sampath Raj acted as gay partners in this movie.

Santhanam’s first ever lead-role movie. Released in 2008, this movie is about 2 men, who are extremely fed up with their work and non-existent love life, vent their frustration towards God. Affected by their words, He visits them along with a box of power. Starring Santhanam, Ganja Karuppu, Prakash Raj and Madhumita. 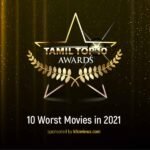