Hit blockbuster in 2009, this movie was directed by 2009. This comedy yet family story was a hit because of Vadivelu’s comedy. Starring Suriya, Nayanthara, Vadivelu, Nayanthara and Ramesh Khanna.

This hilarious movie was directed by KS Ravikumar in 2004. Starring Madhavan, Vivek, Kanika, Sadha, Delhi Ganesh and more. Story about Madhavan, who poses as a gangster to evict bachelor tenants from Delhi Ganesh house but instead helps one of the boys kidnap his lover from her marriage. However, chaos ensues when he kidnaps the wrong girl (Sadha).

Another comedy riot by the same team is this movie. K. S. Ravikumar’s direction, Crazy Mohan’s dialogue and Kamal Hassan’s acting, can never go wrong for a comedy movie. Released in 2002, this was one of the hilarious movies of all time.

The usual story of twins separated will then take revenge on the villain who killed their parents. Directed by K. S . Ravikumar, and cast by Ajith, Meena, Kiran, Ramesh Khanna, Karunas released in 2002.

Another same pattern of family movie with the same 3-brothers story. However this movie is about the things they go through for their only sister. And the struggles she goes through after the marriage is the story all about. Released in 2001 and starring Sarathkumar, Murali, Manoj, Gaundamani, the movie was directed by K.S. Ravikumar.

Released in 1998, this movie was acted by Sarathkumar, Vijayakumar, Simran, Senthil, Ranjith, Manorama and more. Vijayakumar is rich man and his daughter Simran, accuses a loyal servant (Sarathkumar) of attempting to rape her and sends him out of the house. However, she later reveals that she had falsely accused him as she had hated his father. Directed by KS Ravikumar.

One of the best comedy movies of all time is Avvai Shanmugi. Released in 1996, directed by K. S. Ravikumar. This was one of the favourite movies of Crazy Mohan as he mentioned in an interview. The story dialogue was written by Crazy Mohan himself. This movie was a remake of a Bollywood movie, however Crazy Mohan changed it little to adapt to Tamil.

Not directly a caste based movie. However there are scenes where it touched on caste systems. Story about a village head, who is revered by all, leads a content life with his family. Starring Sarathkumar, Vijayakumar, Meena, Goundamani, Senthil and more 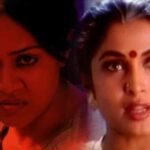