Not many know that this is actually a remake of Amma Nanna O Tamila Ammayi. Released in 2004, this movie is about boxing. Kumaran is very passionate about kick-boxing. His life is shattered when his dying mother asks him to meet his estranged father in Malaysia. Later the father will train him to become a boxing champion. Starring Jayam Ravi, Asin, Prakash Raj, Nadhiya and Vivek. Movie was directed by Mohan Raja.

Not many know that MGR’s biggest blockbuster movie was actually a remake of Ramudu Bheemudu, which was released in 1964. Enga Veettu Pillai was released in the following year with the direction of Tapi Chanakya.

This adult comedy movie was released in 2018, with the direction of AR Mukesh and cast of Vimal, Ashna Zaveri, Singampuli, Shamna Kasim, Anandraj and Manor Ali Khan. This is a remake of Telugu Movie Guntur Talkies (2016).

Released in 1995, this movie was directed by Prathap Pothen with the cast of Karthik, Gaundamani, Senthil and Sanghavi. This movie was very similar to Rajikantha’s Athisaya Piravi.  When Gopi gets hold of the Book of Death, he uses it for his personal gains. But he is soon pursued by Yamadharman and his enemies, who are after him to learn about his sudden fortune. This is actually a remake of Yamaleela which was released in 1994.

Directed and acted by Arjun, this movie was released in 2002. This is actually a remake of a Telugu movie with the same title. This movie is about a young woman who falls in love with a man and wishes to marry him. However, everything changes when she learns about her father’s involvement in his first wife’s death. Starring Arjun, Gajala, Simran, Mumtaj, Ashish Vidyarthi and more.

With the direction of Suresh Krissna, this movie was released in 2004. Starring Vijayakanth, Laya, Sarah Baby, Nizhalgal Ravi, Ramesh Khanna and Seetha. This is actually a remake of Telugu movie – Simhadri which was released in 2003.

Starring Arya, and his wife Sayyeshaa along with Satish, Karunakaran, Aadukalam Naren and more. This movie was directed by Santhosh P Jayakumar in 2018. This movie was not a successful movie in Arya’s career. This is a remake of Bhale Bhale Magadivoy (2015), a Telugu movie starring Nani.

Starring Arun, Sonia Depti, Reshmi Menon, Vimal and more. This movie is about friends in college. And many of them develop their friends into romantic feelings. Directed by KV Guhan in 2010. This is a remake of Telugu movie Happy Days. 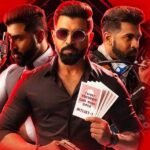