Released in 2019, this movie was directed by Nelson Venkatesan. Starring SJ Surya, Priya Bhavani Shankar, Karunakaran and more. This movie story goes Anjanam, who respects all life forms, faces trouble after a rat creates havoc in his house. While he tries to get rid of the rodent, a criminal breaks into his home to find his missing diamonds.

This Tamil-Telugu dual language movie was directed by AR Murugadoss in 2017. Starring Mahesh Babu, Rakul Preet Singh, Bharath, SJ Surya and more. Story about an intelligence officer, develops a phone software that helps him track a serial killer. SJ Surya acted in a negative role as a psycho killer. However this movie was a huge flop in everyone’s career.

Vijay acted in 3 roles, this movie was a blockbuster hit for himself and the director Atlee. Released in 2017, this movie stars Vijay along with Samantha Akkineni, Kajal Agarwal, Nithya Menen, Vadivelu and SJ Surya. Movie won a few awards including the Filmfare award for Best Music Director.

as a Director & Actor

This sci-fi movie was directed by SJ Surya and acted by himself in the lead role. Along with Simran, Kiran Rathod and Nassar. Music composed by AR Rahman.

Ajith acted in dual roles as hero and villain in this movie. Directed by SJ Surya, this movie was a huge hit when it was released in 1999. Deva, a man with a hearing and speech impairment, secretly loves his twin brother’s wife, Priya. He tries his best to separate the two, to the extent of following them on their honeymoon. Starring Ajith, Simran, Sujitha, Jyothika as guest roles, Vivek and more.

Directed by Selvaraghavan, this movie stars SJ Surya, Regina Cassandra, Nandita Swetha, Arvind Krishna and more. Movie was released in March 2021. The most condemned movie in Selvaraghavan’s career and movie was a huge flop. 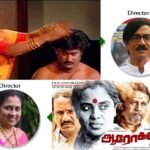 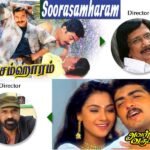